Since 1997, VeriForm has been providing customers across North America with precision sheet metal and plate fabricating services. Operating from a single plant in Cambridge with 26,000 square feet, VeriForm manufactures custom parts primarily for the mining, forestry and machine building industries. But in recent years they have also serviced green sectors like solar, wind and biogas. VeriForm recently opened an energy management division that helps its clients reduce their carbon footprint by cutting utility usage through technologies they developed.

Emissions: VeriForm began tracking their GHG emissions in 2006. The graph below displays their emissions data thus far. As of 2017, VeriForm has met their initial target.

Energy Saving: The fan motor of the dust collector was upgraded to an ultra-efficient model, in order to reduce kWh demand. The motor was also re-balanced for a lower speed in order to reduce future maintenance costs. This move made a savings of 5,508 kWh.

Daylight Sensors Installation: Daylight sensors were installed in Veriform’s shipping area, which allow for the lights to turn off when there is bright enough daylight from outside entering the loading area. This installation created an annual saving of 5,708 kWh.

Carbon Offsets: Veriform cut their CO2 emissions by 71% and purchased Canadian offsets, becoming a first in the industrial sector to achieve 100% carbon neutrality.

Energy Savings: Occupancy sensors were installed on 75% of Veriform plant’s lighting. This saved an estimated 28,000 KwH/yr and had a return on investment of 1 year.

Cheque Scanning: As opposed to travelling to the bank, cheque scanning eliminates the need to do so and eliminated 1000 km of travel/yr.

Compressor Project: Installed 8 hp compressor to replace an old 20 hp compressor which will cause an estimated 0.84 tonne CO2 reduction annually.

Steam Cleaning System: Previously steam system was running all day. The system is now powered on demand which is estimated to reduce 0.45 tonnes of CO2 with associated savings of 60% annually.

Occupancy Sensors: VeriForm has initiated mounting sensors on all lighting within their plant operations. This will automatically turn lighting on/off depending on activity within the plant. This project has the potential to annually reduce 3.6 tonnes of CO2 emissions as well as $4,000 in annual savings.

Lighting Sensors: Added occupancy sensors to every bank of two or three lights in their facility bay area.

Building Efficiency: Implemented a return air system to cut heat loss in the office. This was a low cost solution that reduced the negative pressure caused by their dust collector.

Recycling: VeriForm brought in outside trainers to educate their staff on recycling at home.

Reduced Air Compressor Power: Lowering the plant’s air compressor from 20 horsepower to 10 has resulted in a 90% energy reduction.

Installation of Programmable Thermostat: Setting-up a new thermostat system has allowed VeriForm to regulate the temperature and energy usage of their air-conditioning within their plant operations. This has reduced emissions by 84.07 tonnes and resulted in cost savings of $13,911.

Disconnects on Bay Doors: Installing this system will turn off the heat when the plant doors are left open. Working in sync with the new thermostat system this has reduced emissions by 47.7 tonnes with cost savings of $7,893.

Hand Dryer Installations: VeriForm has significantly reduced the need for the use and purchasing of paper towels with the installation of several XLerator hand dryers in washrooms.

Double-sided Printing: Installed Fineprint software in all office computers allowing employees to print double sided on multiple pages, drastically reducing the use of paper by staff. 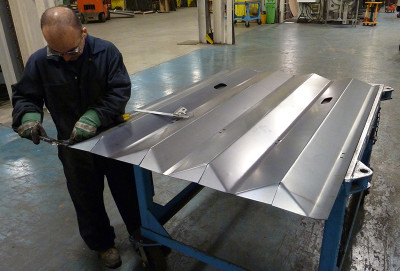