Toyota Boshoku Canada develops and manufactures automotive interior parts.  Based on the Principles of Toyoda, which encapsulate the ideas of founder Sakichi Toyoda, the Toyota Boshoku group formulated its corporate philosophy for maintaining the trust of all stakeholders and its vision, which articulates the type of company they aspire to become.

With the corporate philosophy and vision serving as a framework, they have established clear policies, targets and plans for their business, social and environmental activities. They have also formulated the TB Way and the Toyota Boshoku group code of conduct to ensure that all company members share common values and behaviour.

Reclaimed Water Initiatives: Toyota Boshoku in Elmira collects reclaimed water from various sources – rainwater, drinking fountain water bypass, air-conditioning condensate – and uses this water to irrigate the lawns and to flush toilets.  This project was completed in 2017 and has resulted in a city water consumption reduction of about 60%. Signage on the property and in the washrooms let Team Members and visitors know of this practice.

Repair Booths Pilot Project: Toyota Bo completed a pilot project to try and reduce the amount of exhaust required for its weld repair booths.  Data collection revealed that the repair booths were only used for 5.1 hours/day and yet were being exhausted for 18.0 hours/day. By adding some automation and a damper, the exhaust requirements for the test booth were reduced.  Because all exhausted air must be made up by bringing in outside air that must be heated or cooled, NOT exhausting air results in GHG reductions. There are plans in the near future to roll out the activity to all repair booths and all weld cells in the plant.

Exhaust System Upgrade: The weld shop smoke exhaust system was changed from being manually operated to a demand based system. This resulted in a 2.4% reduction in CO2 emissions.

Water Reclamation: An increase in water reclamation efforts resulted in the water being used for flushing toilets and a reduction in municipal water consumption by 44%.

Energy Conservation: Exchanged all T5 fluorescent lights with T5 LED tubes. Resulted in a 2.4% reduction in emissions and had a 1 year payback; creating annual savings of $32,000.

Miscellaneous Projects: Reduce the usage of vinyl materials as well as added water aerators and 4.9LpF toilets in office washrooms.

Exhaust and Light Controls: Controls are now based on occupancy. Where an exhaust fan used to run 10 years straight, now they sense occupancy and turn on and off. For example: the cafeteria now shuts down when empty. 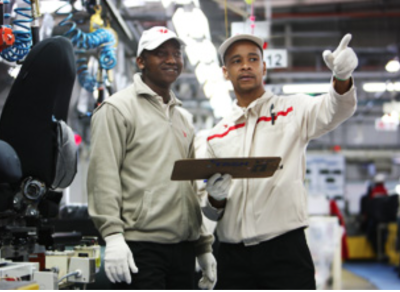