WSP is Canada’s largest consulting firm exclusively dedicated to creating green buildings and communities, with a professional staff of green building specialists in Kitchener, Calgary, Edmonton, Winnipeg, Halifax, Vancouver, and Toronto. WSP provides innovative solutions to reduce the energy and water consumption, and the environmental impact of building designs. WSP’s success is rooted in a hands-on and technical understanding of building systems and energy use. WSP is a one-stop shop for the design and operation of sustainable buildings. They offer the most comprehensive set of green building services on the market, delivering a third of all LEED certified buildings in Canada.

Sustainable Commuting : WSP (Kitchener branch) focused on commuting as a means to reduce their emissions and also to engage their employees. They signed up for a car share membership and encouraged employees to use these vehicles for business trips in order to conduct commuting in a more sustainable manner. They also hosted a ‘Passport to Commuting ‘ event for employees in order to educate on and encourage them to track their commuting data and utilize low-carbon transportation.

Focus on Waste: A waste audit was conducted, as well as an e-waste drive for employees. WSP also hosted a waste management ‘Lunch ‘n’ Learn’, which also educated employees on waste reduction initiatives that can be taken in the work place and at home.

Addition to Company Fleet: Over the past year, WSP added an additional company car to their fleet. This resulted in a 1283 kg carbon reduction and a resulting 15% reduction percentage.

2015 Carbon Cleanse: The WSP was an enthusiastic and active participant in the 30-day carbon cleanse challenge, engaging employees with activities based on heating, electricity, waste and commuting.

Staff Boom: The number of employees working at WSP doubled since 2013 but only lead to a slight increase in the amount of energy the staff uses (20%). Because more employees used alternative methods to commute to work it lessened the impact staff had on the environment.

Increased Transit Incentives: WSP increased the discounts staff can receive on transit passes, by up to 60%! WSP will also be providing ‘cost equivalent’ incentives to staff who carpool with coworkers.

GHG Accounting: Expanding scope of inventory to include both Kitchener offices.

Best Practices: In 2013-2014 WSP partnered with the University of Waterloo EB 402 group on a project regarding GHG Reduction best practices for the local construction industry.

Commuter Olympics: The launch of WSP’s Annual Commuter Olympics encourages all staff to compete against each other through their daily commute in numerous events for prizes and prestige. This initiative helps inspire staff to shift their commuting habits away from single car driving and reminds them to record their daily commuting habits through WSP’s transport tracking system.

Green Incentives: WSP began motivating staff to be energy efficient not only in the office but also at home! Making multiple incentives available for home energy efficiency retrofits. This included: water-reducing fixtures, rain barrels and a yearly reimbursement for all staff to pursue a “healthy/active” lifestyle.

A Grander View: The design of WSP Group’s Kitchener location was recognized as the most energy-efficient office in Canada. The design achieved energy savings of 82% and potable water savings of 89%. 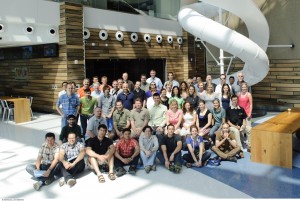 WSP has a corporate culture of innovation and thought leadership in terms of sustainability. For example, WSP has a Green Lifestyle Incentive Program for all employees to encourage them to live green lives at home and at work. Incentives include $1,500-3,000 off the purchase of a hybrid vehicle, discounts on bus and transit passes, and free low-flow shower heads, rain barrels, and compost bins for home use. WSP’s Kitchener head office, A Grander View, is also one of Canada’s first LEED for Existing Buildings: Operations & Maintenance Platinum certified buildings. As part of this certification, WSP has detailed and enforced policies regarding green purchasing and building operations. WSP also developed an in-house software program called Commuter Tracker that employees use to log their daily commutes. This allows the Employee Sustainability Committee to monitor WSP’s commuting emission reduction success and identify areas for improvement. Every summer, WSP holds the Commuter Olympics which includes prizes for those who contribute to lower commuting carbon emissions.

Greatest GHG Reduction (2015): This SWR award recognizes the member of the Regional Sustainability Initiative that has achieved the most significant reduction in emissions relative to their size in 2015. WSP was the recipient of this award due to successfully reducing their GHG emissions by a staggering 24.4% with reductions being attributed to its LEED Platinum certified office building

WSP has a Green Lifestyle Incentive Program for all employees that encourages them to live green lives at home and at work. Incentives for the program include $1,500-3,000 off the purchase of a hybrid vehicle, discounts on transit passes, free low-flow shower heads and compost bins for home use. WSP also developed an in-house software program called “Commuter Tracker” that employees use to log and track their daily commutes.

Specific goals for WSP’s operations are centered around their commitment to carbon neutrality as part of the Regional Sustainability Initiative and their commitment to continue to operate LEED Platinum-Certified facilities for all staff. Currently WSP has a Sustainability Task force made up of representatives in each division that is looking to implement additional sustainable measures into policies and procedures.

WSP has also begun working on a Transportation Demand Management plan for the company as a whole as well as setting up a Carbon Emissions Baseline related to operations across the country. 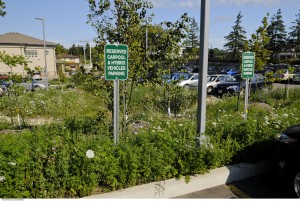 Reserved Parking For Hybrids or Carpoolers 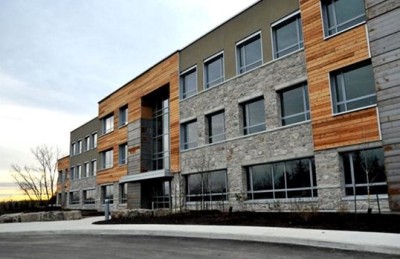