Paper Towel Recycling: Prior to implementing a paper towel recycling system, paper towels from the Home Hardware staff washrooms throughout the facility were collected in large garbage bins lined with garbage bags. The garbage bags full of paper towels were added to either a 20 or 40 year roll-off Waste Management (WM) collection bin and transported to the landfill site. These paper towels are now being collected and directed to a 20 yard roll-off container for paper towels only. The bags are BPI certified and cost $0.45 each. Once the container is full, WM transports the paper towels to All Treat Farms where it is processes into compost. After implementing this initiative in July 2017, Home Hardware has diverted 10,000 lbs of paper towel waste from landfill.

Community Garden: In its second year, the Home Hardware community garden has continued to divert kitchen scraps from the landfill with approximately 40 lbs collected daily for composting.

Leaders in Sustainability Award (2016): Home Hardware received this award from Call2Recycle in recognition of their battery recycling practices conducted at the corporate facility, as well as their encouragement or stores across Canada to participate in the program.

Waste Diversion: Home Hardware developed an organics program to help divert their kitchen and paper towel waste away from the landfill.

Induction Lighting Project: Continuing on a project started in 2012, Home Hardware was able to accomplish an 80% overall update of their lighting fixtures to be more efficient.

Community Garden: Home Hardware developed a community garden that was run by 30 volunteers. An old company trailer was utilised as a tool shed and approximately 4,800 lbs of scraps from the cafeteria’s kitchen were used in making compost. The garden produced over 2,500 lbs of fresh produce which was donated to the Woolwich Food Bank; proceeds from selling produce was also donated to the same food bank.

Cardboard Compacting: A cardboard compactor was used to compact and bail the cardboard from Home Hardware, thereby reducing the number of loads taken to the waste management site and less fuel being used.

Waste Collection Event: Worked with Ontario Electronics Stewardship to hold an electronics collection event. Staff members had the opportunity to bring in a wide variety of end of life electronics and small appliances for responsible recycling. Collected 4,800 lbs. of waste and earned $407.93 for the waste collected, which was donated to their Corporate Charity, Tree Canada.

Induction Lighting Update: Completed a lighting update in one of Home Hardware’s warehouse buildings. 179-200 watt HPS fixtures were replaced with 66z200 & 10×100 watt induction fixtures. They are now using 102 less fixtures to light the same amount of space. This update saves 124,416 KwH/year and provides a reduction in electricity costs of approximately $15,000.

Reduced Electricity Usage and Increased Residual Recycling: Having continued monitoring recycling reports Home Hardware has proactively diverted 94% of their waste from being sent to landfill.

Staff Commute Project: Surveyed staff on commute patterns and encouraged all participants to consider carpooling, walking or biking when possible.

Lighting Retrofit: High bay lights were changed to lower energy efficient lights with brighter illumination capabilities. This move is saving Home Hardware 70 kw/year on energy, and when the project is finished it will result in 90 kw/year in savings.

Stream Lining Trailer Fleet: Adding trailer skirts, a device affixed to the underside of a semi-trailer, for the purpose of reducing aerodynamic drag caused by air turbulence. This will result in fuel savings of 4%-7%. Additionally, to reduce idle time trucks are regularly monitored, through GPS, and helps drivers find the most efficient route itinerary.

Tracking Recycling: Recycling is tracked on a monthly basis and is reported to maintenance and operations. Plastic and cardboard are compacted, metals are hauled and wood ships are collected to be reprocessed.

Home Hardware Stores Limited Green Team was formed in 2014 and consists of 4 Directors and 2 Managers. They meet quarterly and are continuously searching for methods to achieve greater GHG emission reductions. 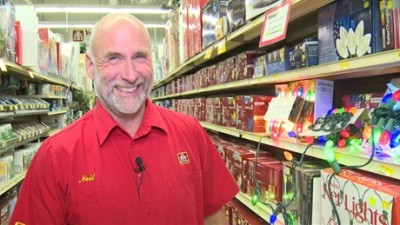