Crawford & Company is the world’s largest independent provider of claims management solutions to the risk management and insurance industry as well as self-insured entities, with an expansive global network serving clients in more than 70 countries. The Crawford System of Claims Solutions offers comprehensive, integrated claims services, business process outsourcing and consulting services for major product lines including property and casualty claims management, workers compensation claims and medical management, and legal settlement administration. The Company’s shares are traded on the NYSE under the symbols CRDA and CRDB.

Telecommute Policy: A formalized work from home policy was created and there was an increase in the number of employees currently working from home with plans for a larger roll-out in 2018.

Waste Diversion: The office is converting in-office coffee machines from disposable pod equipment to a bean-to-cup system, which reduces waste with every coffee cup. About half of the machines have been converted with the balance rolling out in 2018.

Paperless Initiative: Crawford & Company has imputed a paperless initiative with internal processing of invoices through a web portal to eliminate printing/mailing and where possible moving vendor payments to electronic transfers to credit card charges to eliminate cheque printing, envelopes and mailing.

Office Gardening Project: A container garden was launched, growing a variety of edible items. Employees were encouraged to participate through an online watering schedule, and mature vegetables were shared to employees. Other planting initiatives carried out were the planting of a bee friendly and butterfly friendly gardens, with the goal of planting a full garden in the following year.

Firewall Updates: Firewalls at two of the branches in Waterloo Region were updated, contributing to a company net power reduction and subsequent reduction in carbon produced.

Increased Reduction Target: After just four years of membership with SWR, Crawford & Company successfully hit their Bronze level 20% reduction target. The company then decided to re-set towards attempting to achieve a Silver level pledge and an accompanying 40% reduction.

Paperless Office: Crawford made a meaningful commitment to divert paper and electronics from the landfill. In 2015, more than 438 electronic items were diverted, nationally from landfills. Additionally, PDF software was purchased for all employees globally, to reduce the need to print documents.

Energy Reduction: Installed Network Cards in Data Centre cooling units. This contributed to energy savings of 1.82kWs/hr and has reduced run time of the cooling units by 24.61%!

2015 Carbon Cleanse Winner: Crawford & Company was an active participant in the 30-day carbon challenge and was one of four organizations to max out their scores. As a result, AET tied for first and won the Carbon Trophy!

Boiler Replacement: By replacing their old boiler with one that is energy efficient Crawford’s Waterloo office will use less energy and natural gas.

Printer Efficiency: In 2013 Crawford updated 39% of their printers and decommissioned another 26%. In 2014 they launched an office campaign to promote toner recycling and in November focused on how they could create a ‘paperless’ office. The new printers will reduce energy use by as much as 59% and they are 98.4% recyclable at end of life.

Building Partnerships: This year Crawford began working with their landlord, Bentall-Kennedy , to see how they could work together for mutual environmental gain. This resulted in several potential projects that could significantly reduce both organizations GHG emissions starting with a lighting audit at Crawford’s 180 King Street location.

SAN Upgrade: Replaced 4 storage area network’s (SAN) in the KW area. The new SAN’s will use 61% less units of energy (BTU) per hour.

Electronic Recycling: From January to December 2014, more than 6,286 pounds of electronics were diverted from being sent to landfill to instead be recycled. Including 615 computers that we recycled or sold for re-use.

Annual Summer Boiler Shutdown: By shutting down their boiler during the summer Crawford gains an estimated $8,000 in annual savings.

HVAC and Ventilation Improvement: Replaced an aging HVAC system with a more energy efficient model while improving the ventilation system.

Day-lighting Control Installation: Motion sensors were installed in all offices & common areas, including bathrooms, so that lights would not remain on in empty rooms.

Energy Audit: Conducted an energy audit and created a plan that enables them to become a bronze pledging member of Sustainable Waterloo.

Green Team leaders meet monthly to ensure Crawford’s GHG goals are on track. A larger group of volunteers meet every two months to guide strategy and provide input. This group is comprised of staff from every level of the organization and comprises people from different departments. Crawford’s Green Team has also launched campaigns to increase employee commitment to the environment and is responsible for coordinating several events that their employees’ participate in, such as the annual Global Day of Service. During this day employees plant trees in Waterloo’s Laurel Creek Conservation Area and pick-up trash along the Humber River. The group also manages a GREENSHIFT blog that creates awareness, celebrates ‘eco-heros’ and gives employees the tools to initiate their own events.

“Innovation doesn’t happen in a bubble, it is a result of diversification (of team and ideas), the ability to transform an idea into a well thought out strategy and the constant desire to do better. When you have a team of collaborators and your mind is open to new ideas that are sometimes outside your comfort zone, innovation abounds.”

Green Team of the Year Award (2013): This award recognizes the member of the RCI with the most active and effective Green Team. 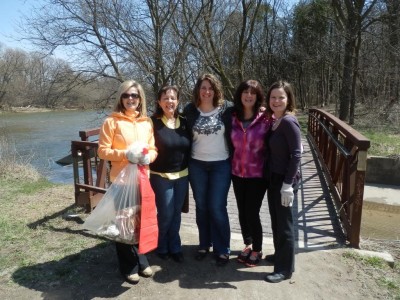