Will cellular agriculture become the future of farming? With increasing worries about the sustainability of food production and supply, cellular agriculture could help solve this problem in an eco-friendly way. It could also help reduce the number of animals slaughtered to provide meat and other animal products for consumption.

What Is Cellular Agriculture?

Cellular agriculture is the field of growing animal agricultural products directly from cell cultures instead of using livestock. Most research in the field focuses on growing meats (beef, pork, poultry, and fish) and animal products (dairy and egg white) in cell cultures. Instead of raising, for example, a cow from birth for milk and meat, cellular agriculture presents an alternative way to get the same products without all the issues associated with livestock.

Cellular agriculture products can be divided into two categories: cellular and acellular products. Cellular products involve growing agriculture products based on living or once-living cells, such as meat. To grow cell-based meat, scientists take the cells that make meat (muscle, fat, and connective tissue) from the animal of interest through a biopsy. Then, the cells are grown in a cell culture medium to become meat. The cell culture medium and how the cells are grown are important aspects of the process. This is because they help the cells become the same meat that comes directly from animals.

Acellular products involve growing and harvesting a product that the cell cultures make. This is used for obtaining products such as milk and egg white, which are a mixture of different proteins and fats. These components are grown directly from microbes, like yeast, without requiring animals. One example is growing the dairy protein casein, a copy of the casein DNA from a cow is inserted into yeast, which will then produce many copies of the protein. This casein can be used to formulate dairy products that are identical to dairy products from cows.

What Impact Does Cellular Agriculture Have Globally?

There are efforts being made to make cellular agriculture mainstream. Early projects include making the first lab-grown burger in London. Scientists took cells from a cow and, at an institute in the Netherlands, turned them into strips of muscle that they combined to make a patty.

Since then, many more companies and projects have focused on developing lab-grown meat and making it mainstream. One company, Upside Foods, wants to sell chicken grown from animal stem cells, first in the United States and then globally. Another company, Esco Aster, has already begun operations at its commercial facility in Singapore. The facility produces chicken products via cell culture instead of slaughter. On July 28, 2021, it was given SFA approval and began making cell-cultured chicken.

What Impact Does Cellular Agriculture Have In Canada & KW? 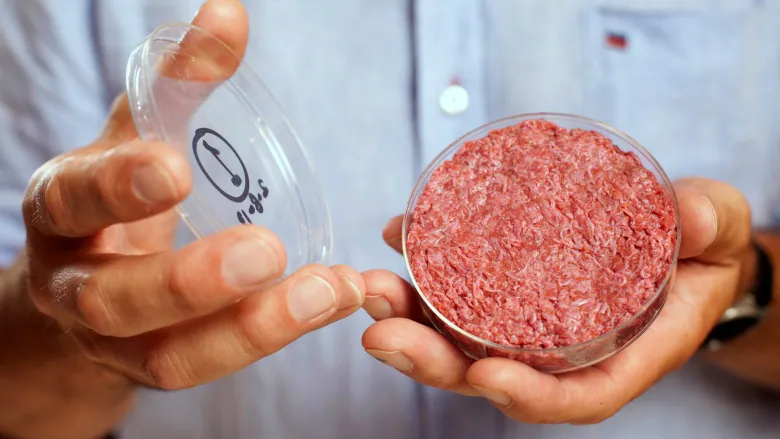 Canada’s commitment to the 2030 Agenda for Sustainable Development could foster research efforts to explore cellular agriculture in the country. One project involves an Edmonton startup, Future Fields, receiving $2.2 million in seed funding from U.S venture capital firms and investors. Future Fields developed a much cheaper form of growth factor — media needed for cells to grow and multiply — for producing cultured meat. The company originally worked on creating poultry products, including chicken nuggets. But they found manufacturing costly. However, while at a startup accelerator program in Singapore in 2019, they decided to shift their focus to developing the growth media involved in lab-grown meat instead.

Meanwhile, the  University of Guelph conducted a study to understand what consumers and members of the meat supply chain think about the new technology before it ends up on grocery shelves.  Simon Somogyi, director of the Longo’s Food Retail Laboratory and Arrell Chair in the business of food at the U of G,  said if the world does get to that point where meat grown in labs is identical to meat grown on an animal, it will be an issue for meat industries such as the beef, chicken and pork sectors. This is because farms and land won’t be necessary to make meat products. The same issue could go for the processing of meat. For companies that make small meat products such as pepperoni, beef burgers, bacon, or hot dogs, would they want to use new technology to cultivate their own products or rely on farms? The study will help determine answers to these questions.

With increasing technology and projects involved in cellular technology and agriculture, it is possible that it will become mainstream in food production and supply. Do you think cellular agriculture will dominate the food industry? Let us know by tagging us at @SustainableWat!