What Is Generating Electricity From Rain?

Raindrop electricity generation is used as a form of microgeneration to provide power for houses and small water purification systems by capturing and funnelling rainwater to drive small turbines. Another method of generating electricity through rain is using piezoelectric materials. Piezoelectric materials generate electricity based on energy released when raindrops hit a surface. The kinetic energy from falling raindrops is effectively turned into electrical energy. Surface charge accumulates on the device as the drops hit and are then discharged as spreading water connects the two electrodes. Power density and energy conversion efficiency achieved by this system is thousands of times greater than similar devices.

Despite the benefits of creating electricity from rain, there are some limitations. The current technology available is limited, which means that the low-frequency kinetic energy in rainfall, waves, and ocean tides is not being harvested efficiently. Tidal power and wave generation are potentially the most abundant renewable energy source available to humans, given that the Earth’s surface is about 70 percent water. Additionally, not much research is currently being currently done on creating electricity from rain versus using more well-known sources of energy such as wind turbines, tidal waves, and solar energy.

What Impact Could Generating Electricity From Rain Have Globally? 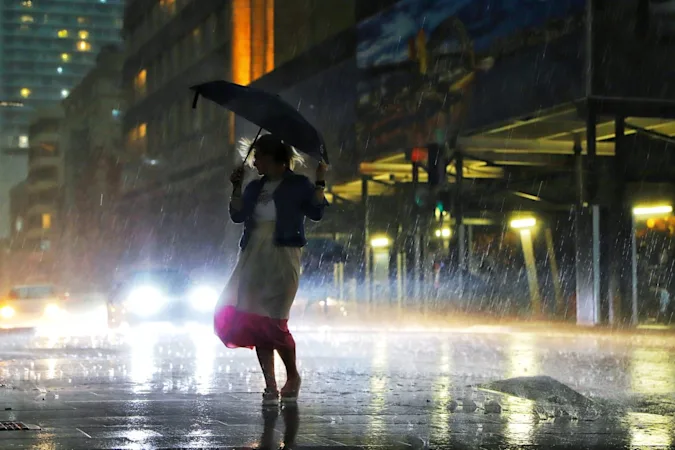 In Hong Kong, a team of researchers from the City University of Hong Kong created a droplet-based electricity generator (DEG). The team claimed that a single rain droplet can briefly generate 140 volts. That was enough to briefly power 100 small light bulbs, and while it’s not yet practical enough for everyday use, it’s a promising step toward a new form of renewable electricity.

The DEG uses a “field-effect transistor-style structure,” Engadget reports, to turn rainfall into short bursts of power. The material the device is made from contains a quasi-permanent electrical charge, and the rain is merely what triggers the flow of energy, according to research published last week in the journal Nature. Though this device is not reliable enough to deliver a continuous supply of electricity. Hopefully, it can be developed into something that could work for people’s homes.

Meanwhile, the Indian Institute of Technology (IIT)-Delhi researchers designed a device that can generate electricity from water drops, raindrops, water streams, and ocean waves. This energy can be stored in batteries for further use. The device, a Liquid-solid Interface Triboelectric Nanogenerator, is made of specially designed nanocomposite polymers and contact electrodes. It can generate a few Milliwatt (mW) power, which is sufficient to power small electronic devices like watches, digital thermometers, radio frequency transmitters, healthcare sensors, and pedometers. IIT-D claimed that “When compared to conventional methods, such as the use of the piezoelectric effect, the present device can generate significantly more electricity.

Though generating electricity from rain is a fairly new technology, it’s possible that it could become mainstream in the future, especially with increasing concerns about rising up energy consumption globally while looking for more eco-friendly ways to supply that energy. So what do you think of generating electricity from rain? Let us know by tagging us at @SustainableWat!