It was sometime in the middle of the week while I was sitting in the National Stadium in Warsaw, Poland this past November, that I was hit with an overwhelming sense of unease and disappointment. Though I had heard it from many other NGO observers and colleagues previously, it was at that moment that the […] 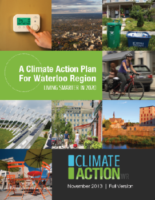 When 3 Months Turns to 3 Years: My Journey with ClimateActionWR

Have you ever started something and vastly underestimated how much impact it would eventually have?  Maybe it’s a casual first date that becomes a life partner, a lecture that grows to be a sweeping passion, or a few wistful lines that transform into an autobiography. For me, it has been the journey over the past […]

What a month! While we had three Regional Carbon Initiative members set targets to reduce their carbon impact – including the City of Waterloo – I’m also thrilled to share Sustainable Waterloo Region’s renewed mission, vision and strategic direction, as well as a 2-minute video that describes our work more clearly than ever.  Meanwhile, over […]

Exciting News! What are you Doing January 16?

I was driving home from the Niagara Sustainability Initiative (NSI)’s launch event, in January 2011, when I first fully came to grips with an important realization: while the past year of coaching NSI had been rewarding and exciting, it couldn’t continue on in such an ad-hoc way. At the time, I blogged about it here. This then […]

WATERLOO REGION — Regional politicians endorsed a community plan to reduce greenhouse gas emissions. The regionwide climate action plan aims to cut emissions to six per cent below 2010 levels by 2020. The cities of Kitchener, Waterloo and Cambridge already endorsed the plan. Regional councillors gave their blessing at a committee meeting this week; formal […]

After a year of planning, clarity: we convert sustainability interest into action

At the most recent SWR Board meeting we supported a motion for full partnership with the Region of Waterloo’s TravelWise program, as it moves beyond its two year pilot and expands on its mandate. TravelWise will continue to provide incentives to employers to support their efforts to reduce the number of people driving alone to […]

This month, we are glad to welcome the YMCAs of Cambridge and Kitchener-Waterloo and MW Canada Ltd. as our newest Regional Carbon Initiative Members.  We’re also thrilled to announce that the Region of Waterloo, and RCI member since 2010, has increased their corporate sustainability target and become a Bronze Pledging Partner.[Continue reading]

Waterloo and Cambridge have partnered with two local environmental non-profit organizations, REEP Green Solutions and Sustainable Waterloo Region to reduce greenhouse gas emissions in Waterloo Region. Moving forward, ClimateActionWR hopes to work with community organizations and municipalities to compartmentalize greenhouse gas emissions in an effort to successfully reduce them. The initiative, which is a first […]

WATERLOO REGION — Local municipal councils are working on a Community Climate Action Plan in an effort to reduce greenhouse gas emissions. The work will cost millions, but local politicians say the payback is worth it. “We talk so much about the cost of infrastructure, but this is about the opportunity to service multiple needs […]